By now, my activities were starting to generate interest, not just from friends and family, but the wider climbing community. One of my father’s co-workers, an experienced climber, had been following me with interest. He did however express concerns about the equipment I was using.

My parents, being the worrying type, ensured I was then kitted out after my birthday. They very kindly put money towards getting some good crampons and a top jacket. With my new equipment, I felt like I belonged in the hills. I couldn’t wait to get out and about in the hills! 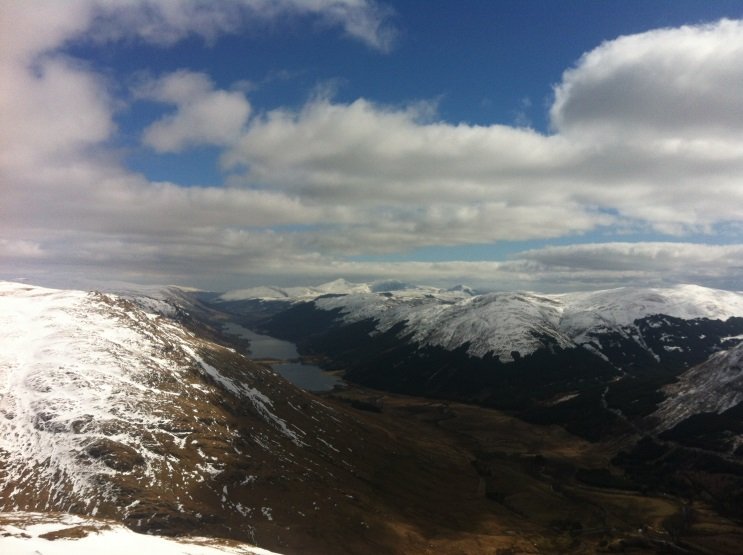 The question was, was I going to go? As seemed to be the case a lot, I had football in the evening, which limited my time. The two choices were Ben Vorlich, or Beinn Tulleachean and Cruach adrain. The latter won.

Upon looking at the map, I discovered the start of the hill was a little further away than I thought, so this delayed my start.

The start of Beinn Tulleachan isn’t very clear, as you have to walk through a farm, and I felt as if I shouldn’t be there. On my approach I was greeted by two dogs. As a dog lover, I got very excited about saying hello, but as I got closer I realised they weren’t the most welcoming, probably fed up with intruders.

There was no clear path up the hill, so I just went for it! It was a fairly boring ascent, just slogging away, putting one food in front of the other. It started getting more interesting about half way as I hit the snow. Out came the crampons!! 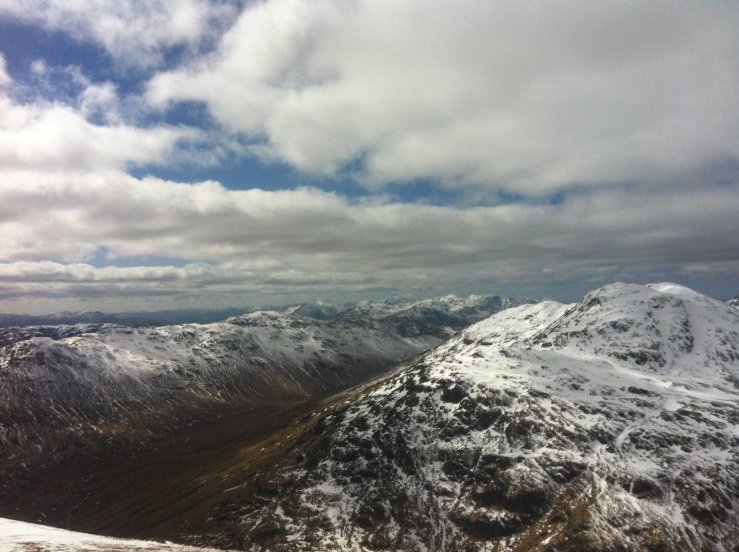 This being my first real snow climb, I was a little apprehensive, especially with the voice of my mother ringing in my ears! But everything went really well, the crampons were making a difference, and the views were SPECTACULAR!

I was flying up the hill, making good time, so I stopped for a break, just to take it all in. After about 10 minutes, I started moving again, and discovered, I was only a few metres from the summit! Here I met a couple of lads who had just come from the opposite direction, they weren’t much craic, but as they left, a Canadian student arrived, just as I was getting my pipes out. As you can imagine, he was in shock. He asked if this was a normal thing in Scotland. After messing him about, telling him it is traditional, I told him my plans, and he was very excited to take a photo and take it back to Canada with him. He told me of all the climbing he had done in his short time in Scotland, and really motivated me to get a move on and do more! We parted ways as he had a train to catch! 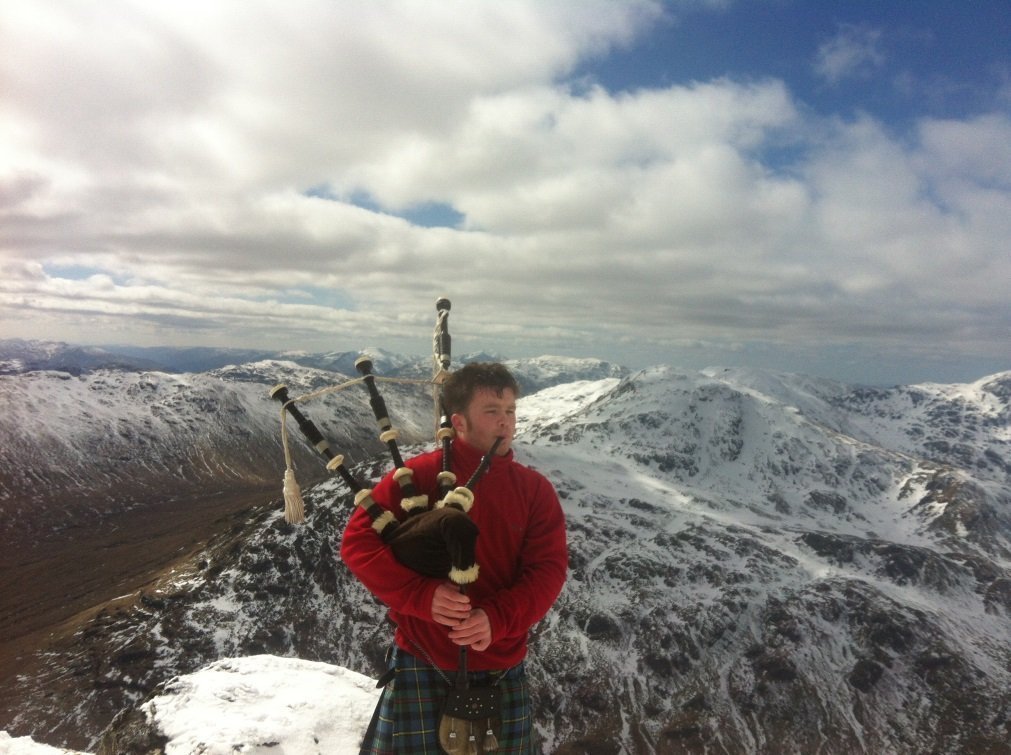 On to Cruach Adrain, and it did look quite intimidating. The whole journey was buried in snow! I was really giving this new gear a test. It looked a long way, and the route down seemed so much easier. Never being one to set out to do something, and not complete it, I forced myself to keep going! I have always been the type, that on the rare occasion I do call something a day early, I think back that night, full of regret. Any time you feel like you cannot do something, just think of how you will feel a few hours later, by which time you would have reached your goal anyway. 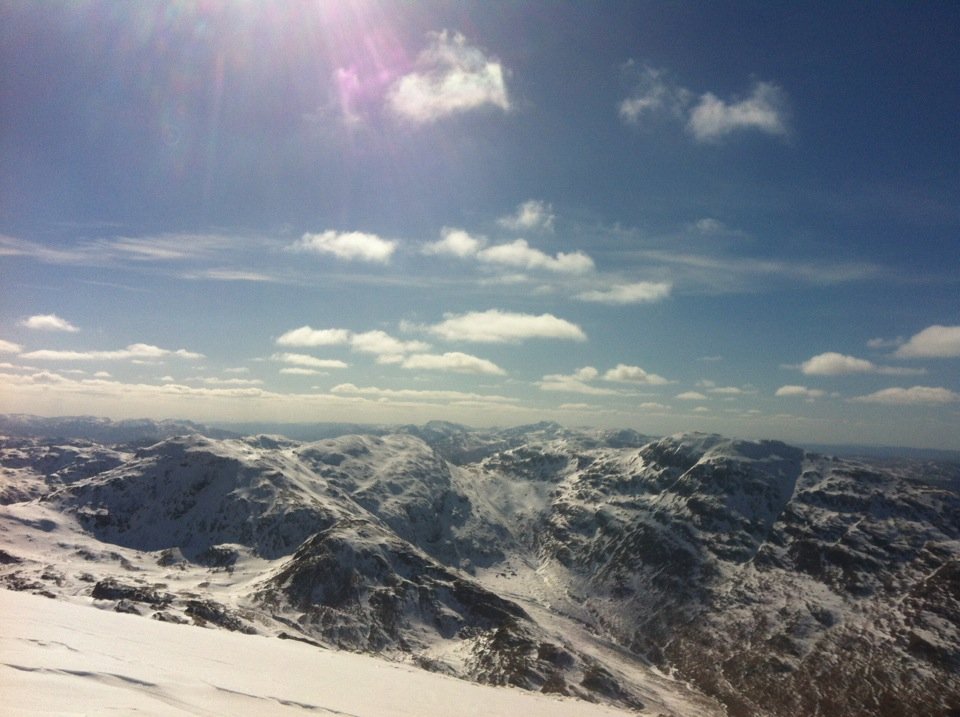 I kept slogging away, and football training was getting further and further away! It’s amazing though, even just hoping onto a different hill, how the views are so different. Looking back to Tulleachean, and over to the surrounding hills, really makes you feel so free! What amazes me, too, is how close everywhere seems when looking from altitude. 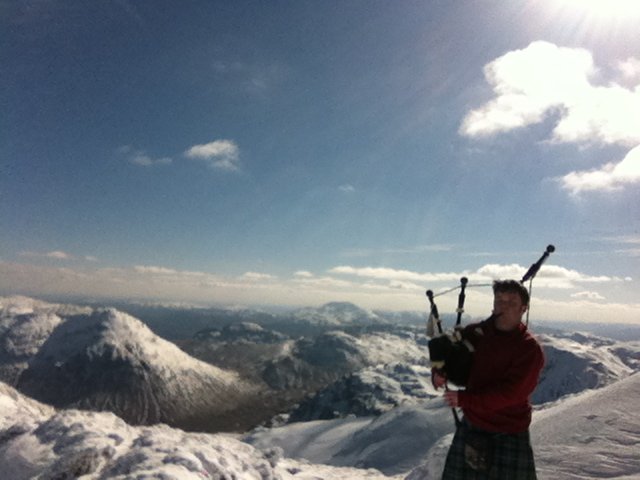 Playing a few tunes at the top was a struggle, as the wind picked up a little, but I managed to get all set up and belt out a couple of tunes. I then sat looking down towards Crianlarich, thinking about how many times I have driven that road, and until recently, didn’t know this magnificent Munro existed. It was in these moments, having come through the tough snowy conditions underfoot, that I would be able to do this! I could achieve the goal I set myself, and any other goal for that matter! Except football that night, I didn’t make it to football!