Coaching done at 11.30am, and suddenly, I come down with a bug! Will not go into detail, but let’s just say I was late to meet my fellow coach after the session to have a pint to celebrate the end of a successful block of coaching!

I finally made it to meet, Mark, and we both toasted our success. He then asked me what I was doing for the rest of the day. My answer, having just told him about my last hour, brought out some laughter from him, and several others around us. Maybe it’s my competitive nature, but this just spurred me on! I had all my stuff in the car, and was the right end of Glasgow to just shoot off.

This was the latest I had ever started a climb, and with my stomach threatening to ruin things, I didn’t feel this was going to be a successful venture. When you are arriving at the foot of the hill, and about 50 people are in the car park, packing up for the day, you begin to feel like the guy that is just about to enter the water as everyone is fleeing from the shark! I got a few funny looks, as I didn’t go through the whole pre-climb palaver that so many go through, I just parked up, took my bag out, and off I went!

Starting from around 400m, Tarmachan isn’t the toughest, in fact, it is probably the easiest I had done to date, but my condition was making this tough. I constantly had a voice in my head telling me this was a ridiculous idea. I kept telling it that I had driven quite far and it would be a waste. Sometimes the biggest arguments you will ever have is with yourself, but too often, you do not win! The winner is that silly thing inside you that tells you, you can’t or shouldn’t do something. I was determined I was winning this!

I met a father and child half way up. The child was looking at me with my big bag, asking if I was camping. They were both very interested in what I was doing, and said they would look up my videos.

As is so often the case, the wind picked up on the summit, but this was the coldest wind chill I had experienced to date! The views of Lawers range, and along the ridge were clear and crisp, but the wind was piercing right through me! So, get the photo taken, and get out of this wind as soon as possible. 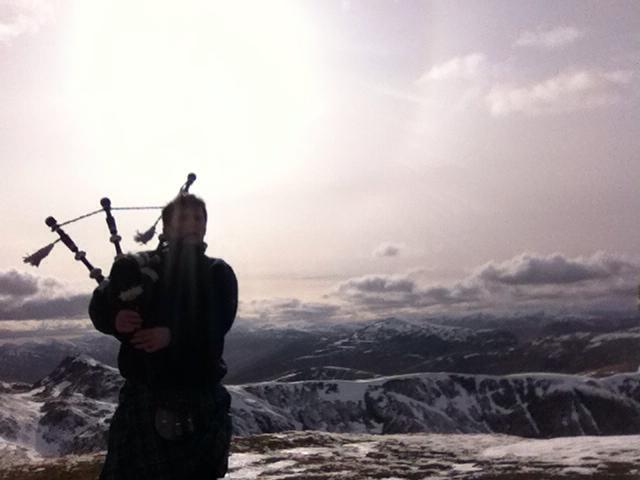 Only photo of the day

The descent was as uneventful as the ascent, and I was looking forward to going to the falls of Dochairt inn in Killen, which looked like a lovely traditional pub by the falls! I wasn’t disappointed.

As I entered the bar, I was drawn to the beautiful open fire in the corner, welcomed by Runrig placing on the sound system, and pulled to the bar by the smell of the fresh food! I enjoyed a simple burger and chips, while going through my photos, before disaster struck. I still do not know what happened, but somehow, I LOST ALL my photos and videos from the day. All that effort getting a good picture with my pipes in the cold, and they were gone. Fortunately, I had posted ONE to Facebook, so was still able to add that to the collection.

I left the pub for 15 minutes to go and get cash, as I wanted another drink, and came back to a hen party and a live musician. I couldn’t believe how the pub went from such a quaint atmosphere, to jumping in the space of 15-20mins. The place was wild, and the music fantastic.

It was here I met Robert Sutherland, a pianist who toured with Maria Callas, a very famous classical singer from the 60’s. We talked for about 2 hours, trading tales of my piping, and of course, his vast chest of stories, I doubt he even scratched the surface. He was part of another wedding party who were to leave the pub to go to another venue for dinner, but he was determined to stay and enjoy the fun! He was in his 80’s, and still wanting to stay out and enjoy the music and atmosphere. He was quite inspiring, and a privilege to spend time with. Unfortunately, they man beside us was the local village “celeb” or so he thought. Having had half a pint too many, was feeling VERY important, telling tales of how he caught the biggest fish in the Tay. Not to knock fishing, but I would far rather hear from someone who has toured the world with an international superstar than someone who can through a line over the side of a boat.