Home>Munros>Perthshire>Ben Lawers 4 – 5 becomes 2, then 4
Previous Next

My previous climb had really wetted my apatite to tackle the Lawers range. From Meall Tarmachan, the site of those mountains rising up out of Loch Tay looked fantastic, and with the snow adding a stunning sparkle to the slopes, I couldn’t wait!

Having tackled my last hill with a pair of socks in my pocket, to use as gloves due to losing my pair, and not being able to find a shop on the way, I stopped at the Killen mountain shop to purchase a good pair. The assistant was giving me the lowdown of the conditions, and to be honest, he didn’t inspire confidence. I didn’t bother telling him what I planned doing on the summits, as his encouragement would have disappeared! 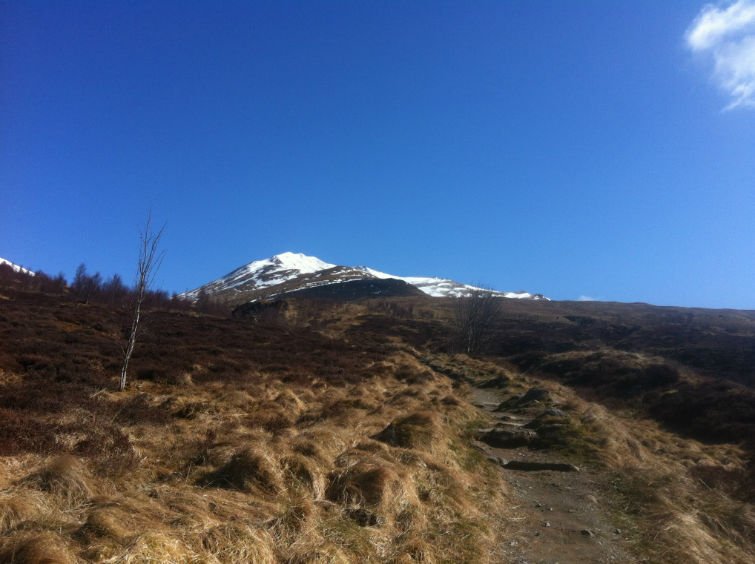 There were a few walkers starting off at the same time as me. Having been completely alone on previous climbs, I thought this would be a good thing. However, the competitive edge in me, saw this as a bit of a competition, and I could not let these people pass me!

They eventually did, as I took a different route, and doubting myself, saw the route they took, and assumed I was wrong, so back tracked and followed them. I then met a couple guys struggling with their map, wondering which hill was which. We decided Beinn Ghlas was ahead of us, and we could either take the gradual route up to the ridge, or just head straight up. I took the latter route, hoping this would get me up quicker. I did gain height very quickly, and got amoungst the snow, however, I seemed to lose my way a bit, and when I saw the other guys heading up towards a different top, I thought I had make a mistake! I again backtracked, sliding back down the hill, to get back on track. 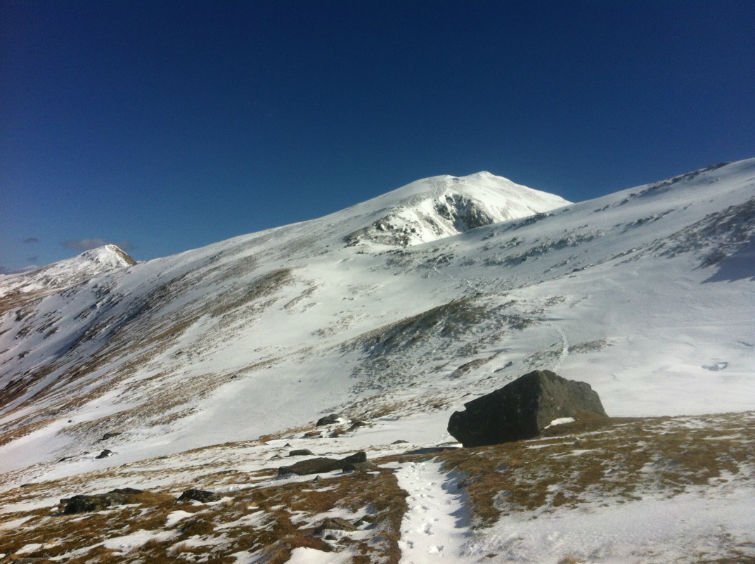 After about 45 minute of trudging up “Beinn Ghlas” is suddenly dawned on me, that I was half way up BEN LAWERS! DAMN IT! This would mean I would have to miss out one of the five hills I had planned for the day. After shouting a few naughty words to myself, I accepted Beinn Ghlas was to wait for another day, and I carried on. 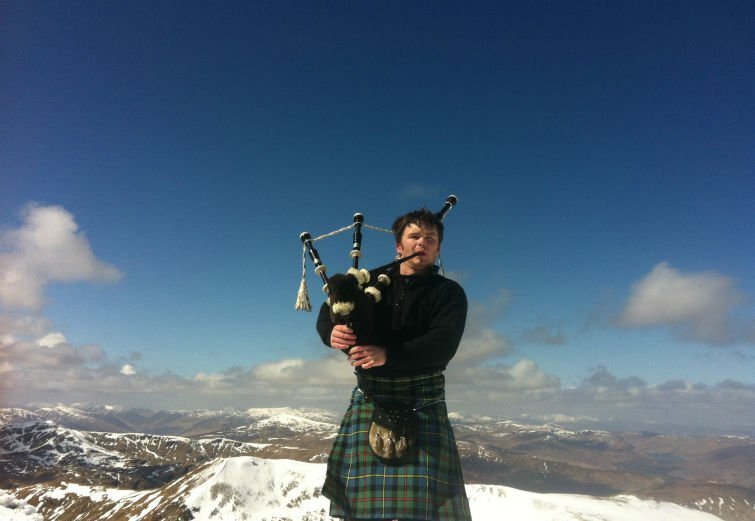 Upon reaching the top, I met the guys that I wrongly entrusted with navigation, and we had a good laugh about “missing” a 3000ft mountain! I took it as lesson learnt, always trust your own navigation skills, unless you can trust others. We had a good jolly at the summit, they took photos of me, and a couple videos. It’s amazing how much more enjoyable it is when someone is there. Some other climbers joined just as I finished, and said they music gave them that extra inspiration on the way up!
I sat having lunch with the new group, which included a couple of munroists, so I was interested to hear their tales. We discussed the rest of the day, and we came to the decision that An Stuc was too dodgey today in the conditions. So my plans for the day went from 5 hills, to one! I wasn’t impressed.
Spurred on by my anger at how stupid I was, I decided to to just do Beinn Ghlas! I met a guy on the way down, who advised me about a storm that was coming later in the afternoon. I figured it wouldn’t bother me, as I would be down within a couple of hours. 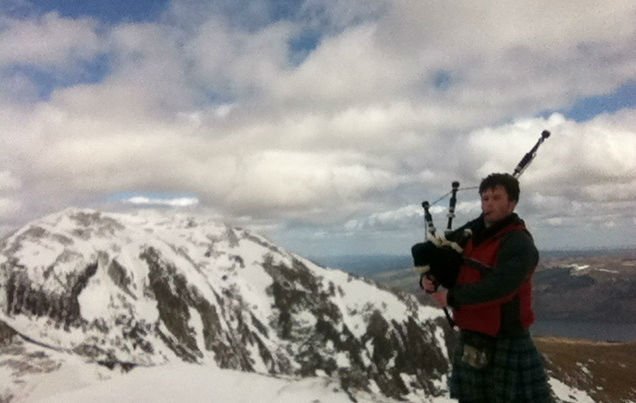 Photos on Beinn Ghlas were difficult, and involved me making a wee snow man to set up my camera. I any of you reach summits in the winter, and discover a snowman, I probably have been there.
Descending Beinn Ghlas was the most fun descent by far! On my back side! Having the correct equipment, making this a lot safer than before, and I was able to cover about 300m in a matter of minutes.

It was time for another break. As I sat in the valley, and looked at the hills in front of me, I remember saying out loud “**** it, let’s do it!”. The ascent of Meall Corranaich didn’t look too demanding, and so it turned out. I was able to gain height very rapidly, and was starting to feel a sense of achievement again. Three Munros in a day sounded a lot better than 1, which I thought it was going to be a couple hours previous.

The wind was becoming very difficult however. It was the windiest and coldest yet on the hills. I spent time chasing bits and pieces from my bag, including my new gloves, as they attempted to escape in the wind. This was the hardest photo to take to date, which wasn’t helped by my phone dying again due to the cold. 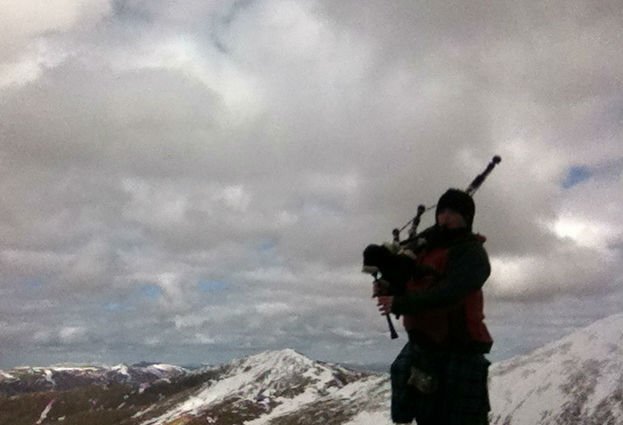 I finally managed to get my picture, however, I was unable to get my video recorded. Just as well, as my fingers and face were so cold, I can’t even remember if I could get a sound out!
Again it was decision time. I could see two summits in the distance, and knew one was meal choir Leith. The first one didn’t look too far away, and neither did the storm that was promised! Dark clouds were forming in the distance, and crawling towards me like some mythical monster ready to engulf everything in its path.

As I got closer, I started questioning how easy this was, so out came the map. Yes, Meall a’Choire Leith was the hill further in the distance! I had an easy escape route down into the valley, and with the storm on its way I thought maybe I should take it. But as usual, I carried on.
It was quite a straight forward walk, and the hill itself was a nice gradual climb, if unexciting. The clouds were getting closer and closer, and the wind picking up. It was basically a case of get to the top, get the picture, and get the hell off! The clouds in the background did make for some dramatic photos though. 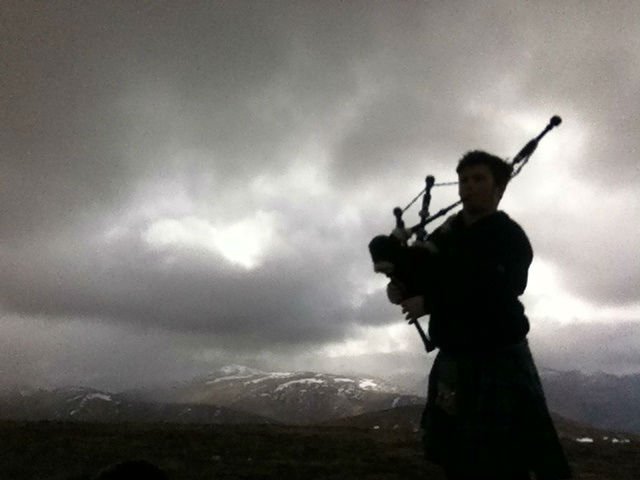 As the clouds engulfed the summit, I dived down the side of the ridge, which led down to the valley between the hills. As I looked to the summits, none of them were in view. It was hard to believe the views I had experienced just hours previous! The rain was lashing down hard, but I was at least sheltered, and heading home…or so I thought. 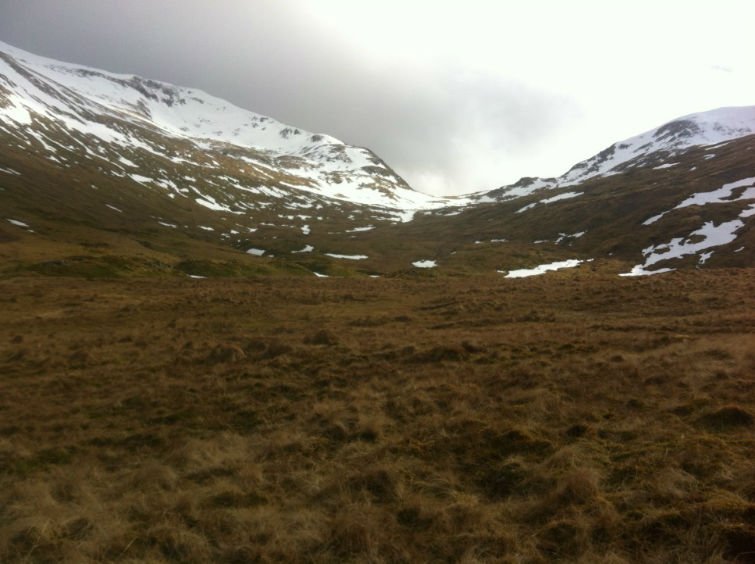 What I didn’t realise, was that by heading straight down into the valley, I was infact descending to 300m below the midway point, so I had to climb, through boggy, heather, sheep country. This was the worst kind of slog, as the final destination was in full view the whole time. It was demorilising, as I seemed to be getting no closer, I was wet, tired, and beginning to get hungry. I questioned my logic in taking the route I did, but I had to get out of the weather. I told myself I was lucky, as although it was a slog, aat least I was safe, and in no danger of falling off cliffs, which can be the case on so many hills.

I celebrated arriving at the bealach, as much as I have any Muno summit! Relief! Time to get to the pub! 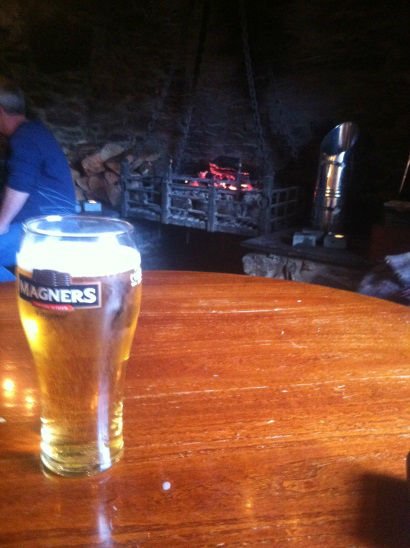 The falls of dochart arms was a much quieter venue tonight, and I celebrated my day with a meal of scallops and fish n chips! A lovely relaxing end to a VERY tiring day!