The 5 Sisters of Kintail

The 5 Sisters of Kintail

For many people, seeing a hill range like the 5 sisters once is like a dream come true. The majestic hills rising out of Loch Duich, giving view points over such a vast area of the North West Highlands, are very much high on every hill walker/climbers lists. For me, ,until recently, the site of the 5 sisters merely meant I was on my way to school!

I cannot could the number of times I have traveled over Man Ratagan from Glenelg, and seen the sisters. It was usually a sign that I was due to get my books out for some last minute homework.

Anyway, with my new found passion, and the fantastic weather whilst home, I decided I was going to do it! I had recruited my friend Donald in the pub the evening before (you always get people enthusiastic in the pub).

There have been many reviews about this walk, and to be honest, the route we took was no different. It was a tough slog, with the sun bearing down on us. A few water stops were required. We did go a little bit off piste in an attempt to be more direct, and although we gained height, we were knackered haha.

Fantastic views were seen very quickly, and we were both mesmerised by it all. Donald, who had great local knowledge of hills, was naming all the hills in the distance.

We got to the top of Sgurr na Ciste Duibhe fairly quickly, and took time to take it all in. Of course, I dug out my pipes and rattled out some tunes. To my surprise in the distance, some walkers started applauding, probably confused as to what was happening.

Onwards we went, the hard work was done, or so we thought. The intimidating monsters in front of us awaited us! We slogged away, quite happily, chatting away, Donald even took a phone call from work, and we were enjoying the day. The climb began to get steeper, so after a while we took 5 minutes. As has happened before to me though, we discovered we were only meters from the top!

We caught up with those who applauded before, and got talking. One guy was pretty condescending, asking if I had proof of what I was doing, and sarcastically said “well you got a few to go then” when I told him this was only my 22nd. My response to him, he was quite seasoned in years, was that I had plenty time on my side. That annoyed me, but what you gonna do? 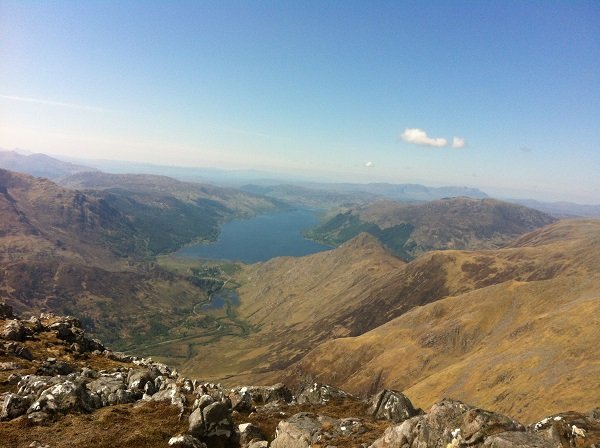 The last Munro was still to be tackled, and this was tough, again though, we just slogged on and made it! There was still little snow on the summit, hard to imagine in the heat!

The last summit we hit for the day, Sgurr nan Saighead, was actually the most enjoyable part of the day. This hill was very exciting, with fantastic cliff faces, and narrow ridges. I really enjoyed this part, and it wasn’t as taxing on the legs.

The final descent caught up with us, as we both hobbled down. It was a fantastic day out, and we certainly earned our pints in the Glenelg Inn!