Fife to the Highlands

Fife to the Highlands

Next up, was the Kingdom of Fife! Having spent some time in Dunfermline, playing football at the stadium, I was looking forward to going back. Tickets were getting sold for the up and coming play off games, so it was quite busy around the ground, but inside, again, were a couple of groundsmen, who let us do our thing. Outside, Martin had arranged to meet some friends, so we spent a little time regrouping. 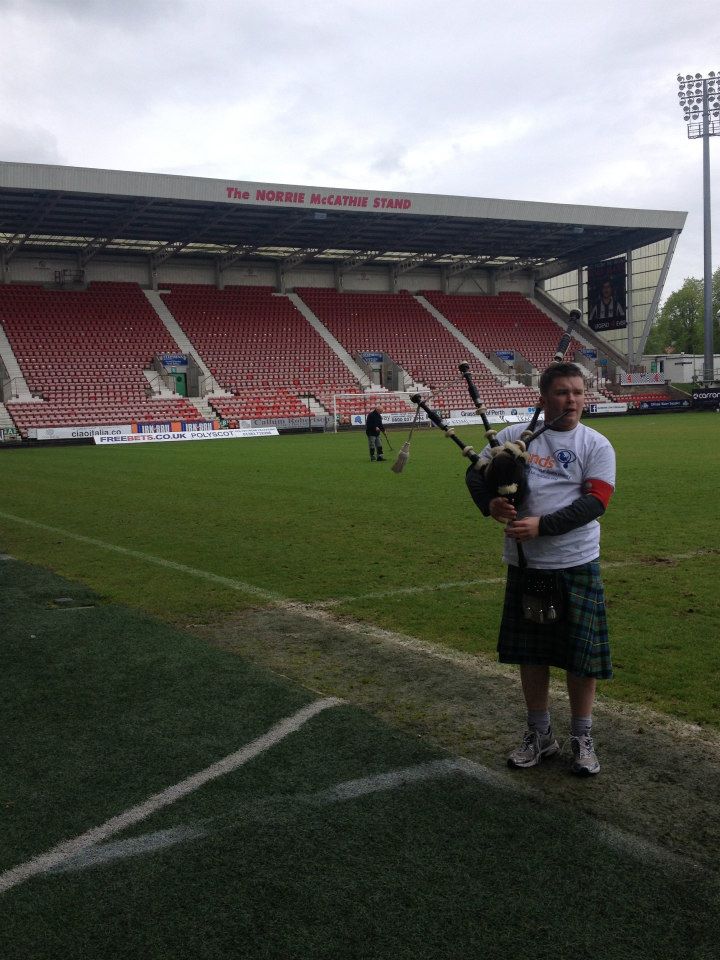 Being a sport therapist, I brought along one of my treatment tools, as I felt it would be needed to repair weary limbs. This was the first time it was used, and we hadn’t even left Fife! 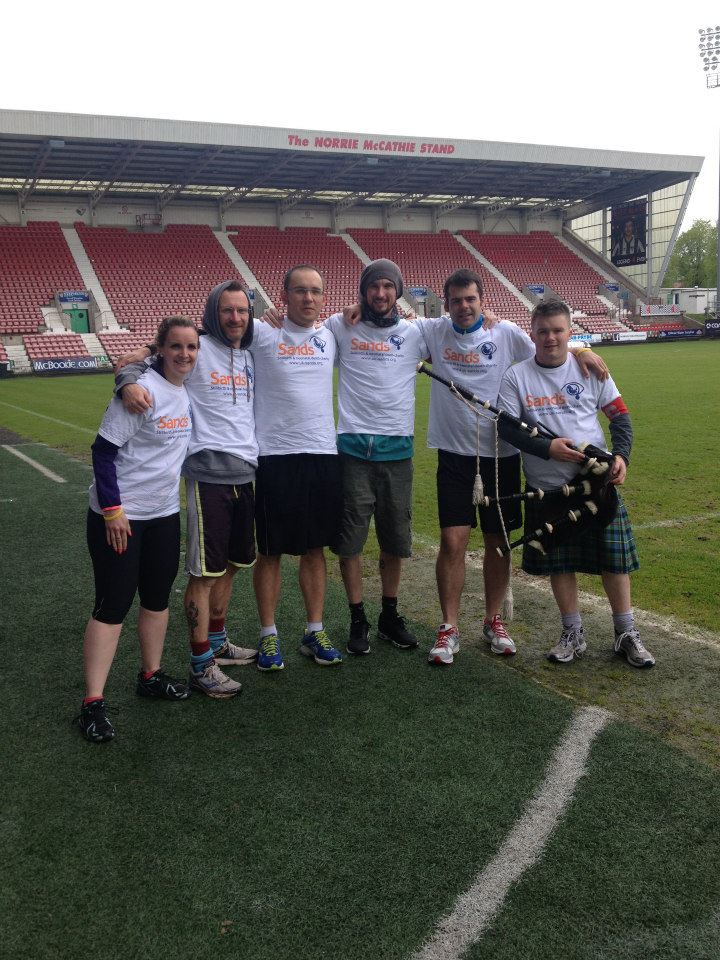 Cowdenbeath was next, and I am sorry, it is not a bonnie ground! A football ground being shared with a speedway, which was also the case in Berwick, does not make a great setting for a football ground, but hats off to what they do for the community. The changing rooms were like a dungeon, but there was some interesting art work around the ground, so it wasn’t all bad. 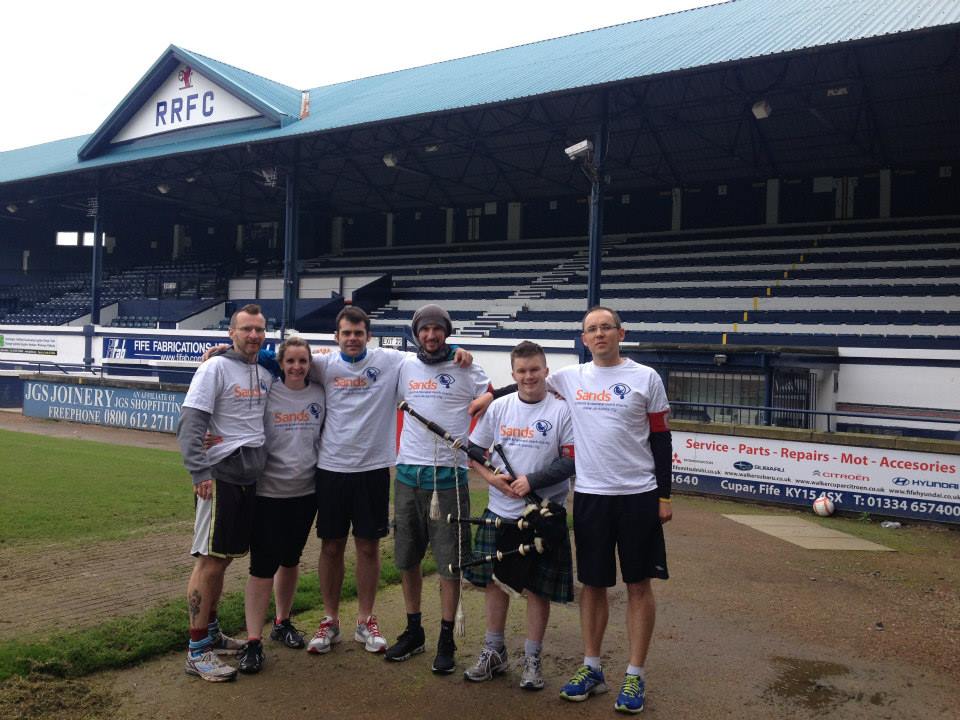 On we drove to Kirkaldy, and for many of us, one of our favourite grounds. Starks Park, the ground of Raith Rovers, was the most traditional stadium we had seen yet. Build upon a hill, all sides different, you could really feel the history, and the buzz that would be around this area on a match day. 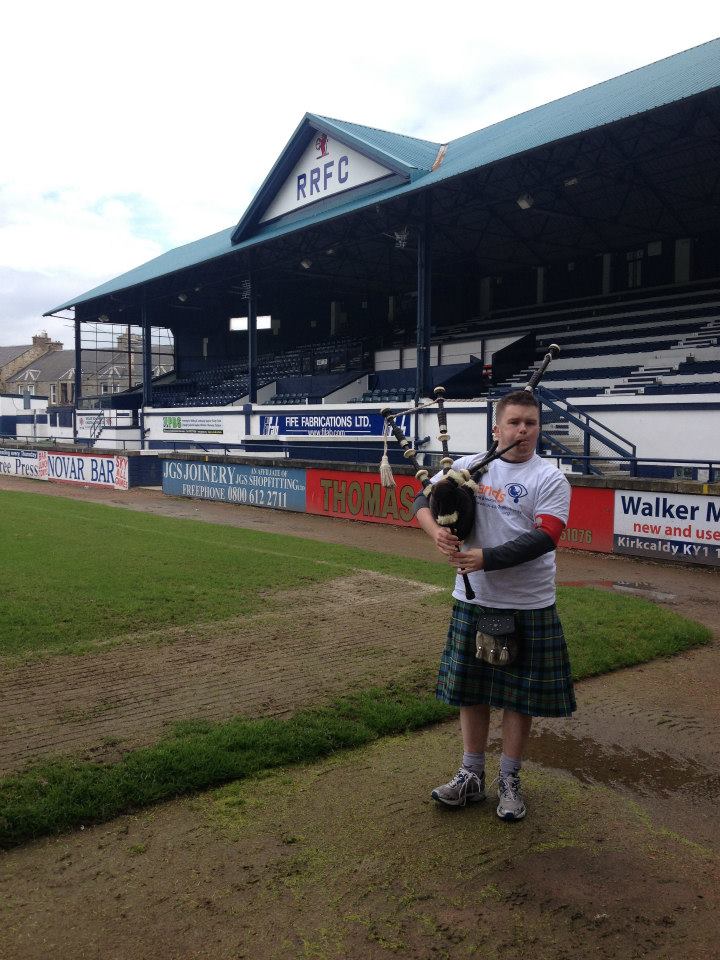 We even got a hold of a football, and with me being like a dog when a ball is around, I just had to go play with it! 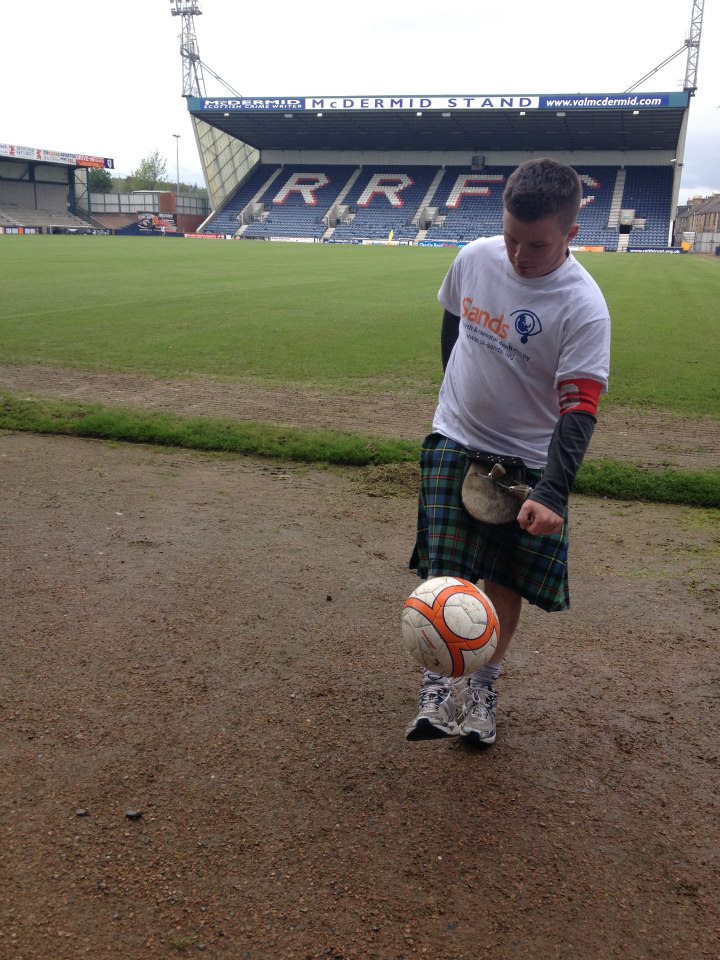 It is a shame more and more of these types of football grounds are being left for fall away, and be replaced by “lego stadiums” that all look alike!

From such a wonderfully traditional stadium, to possibly the most traditionally run club, East Fife. None of us held much excitement for this visit, but half an hour spent with the groundsman changed that. He explained to us, the community initiatives that keep the club running. From tickets sales, to cleaning shirts, the town is proud of its club, and does what it can to keep it running.

In a sporting world, where it is all about the money and the trophies, it is so refreshing to see a club with its community at the top of its priorities. 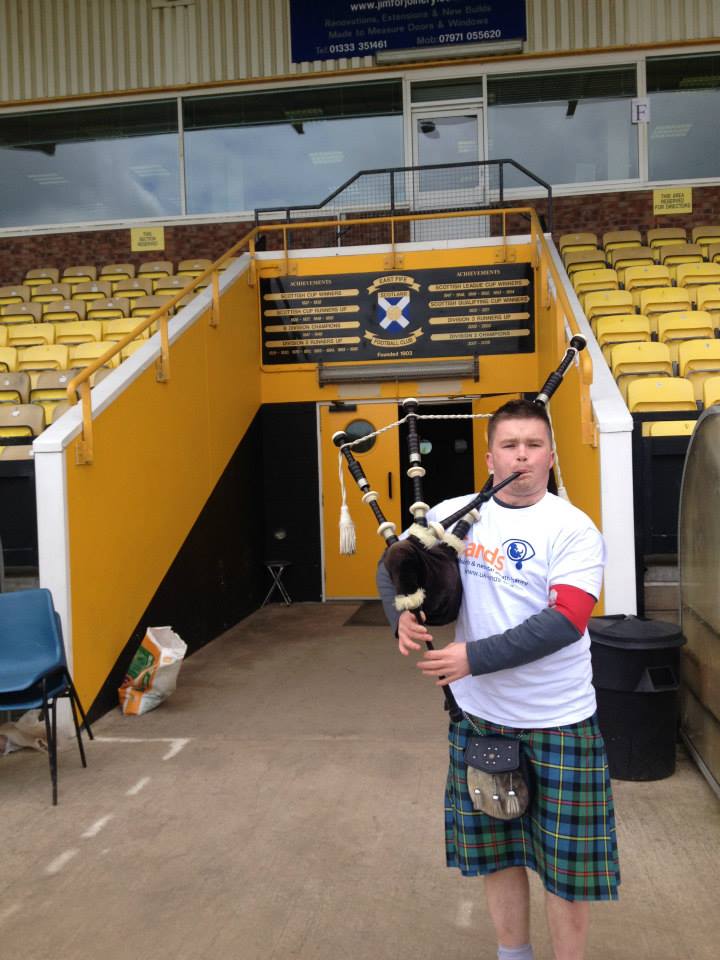 We were all given strips to wear and be photographed in, and it was all in all, a very pleasant visit. Come on East Fife! 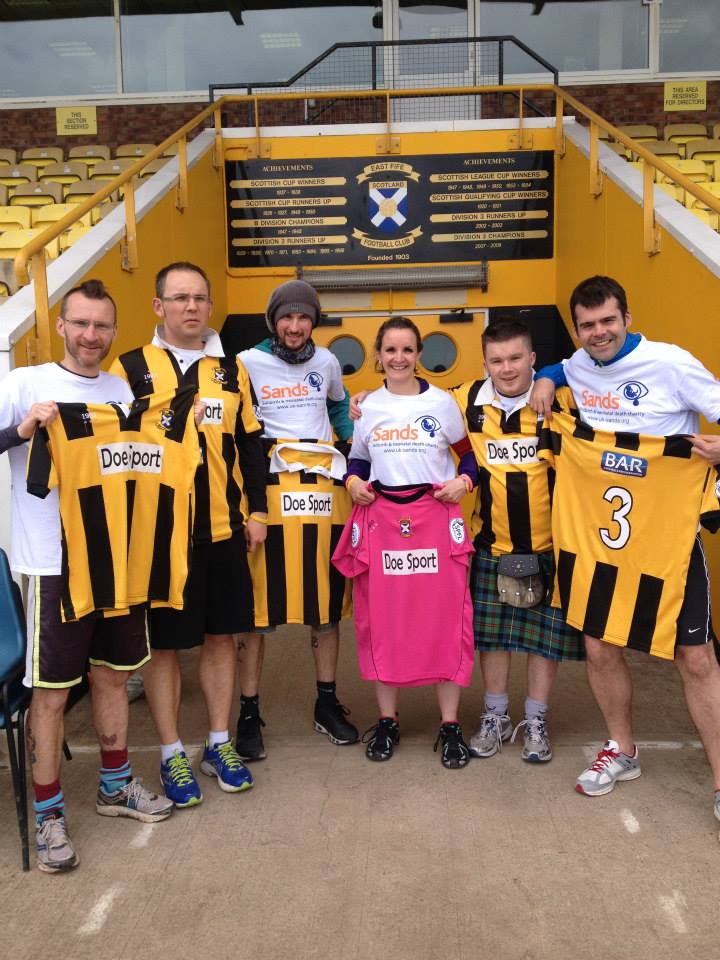 We were finally starting to main progress on the map. All the grounds so far, had been very close together, and now, as we approached Perth, we were starting to see the country open up a bit before us. Next up, was Scottish Cup finalists, and eventual winners, St Johnstone! 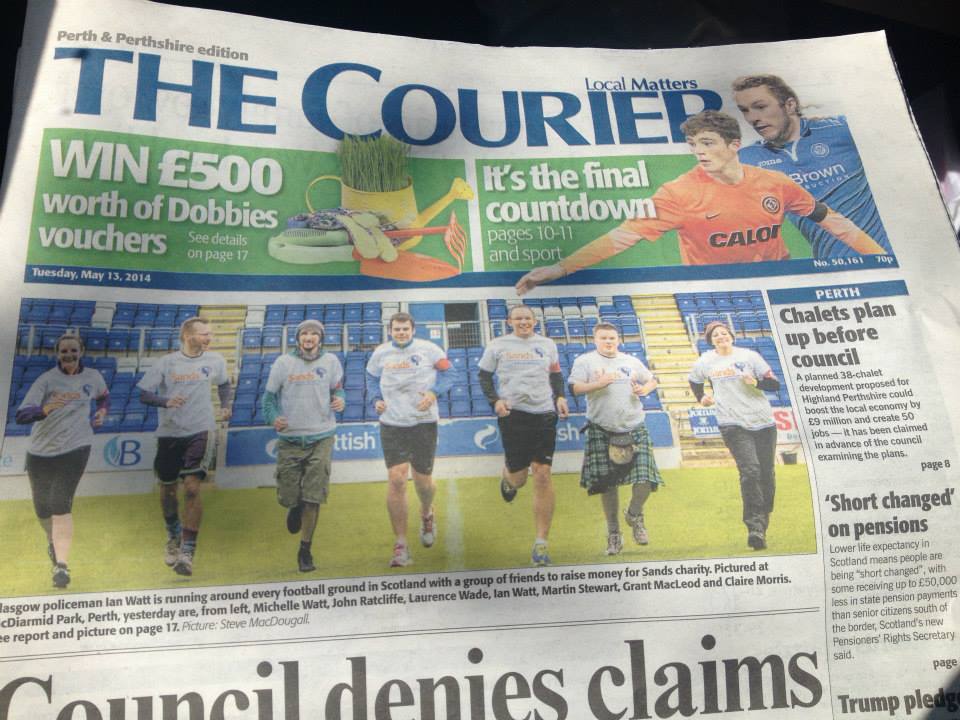 It all happened here! On arrival, we saw a couple of reporters, and even a TV camera. They were very interested in covering our story for the Perthshire Courier. Of course we were very excited about this, and spent a lot of time getting the correct footage. 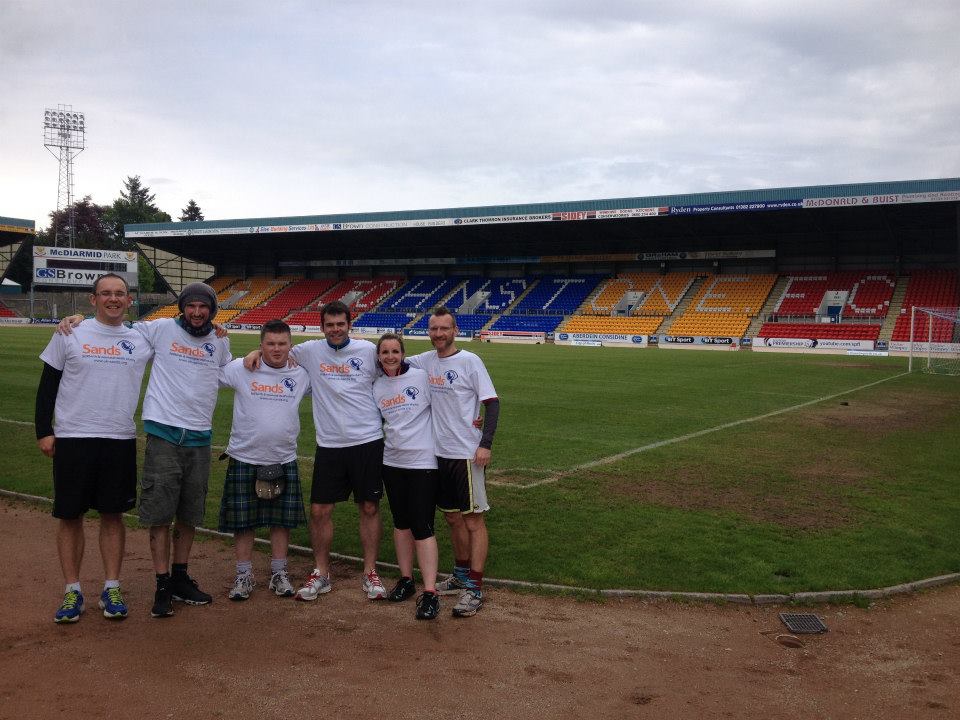 We did our lap, filmed by the crew, and even did a few across pitch runs in order to get better group shots for the paper. Michelle and Ian gave a short interview, which was to later appear in the online edition of the paper. 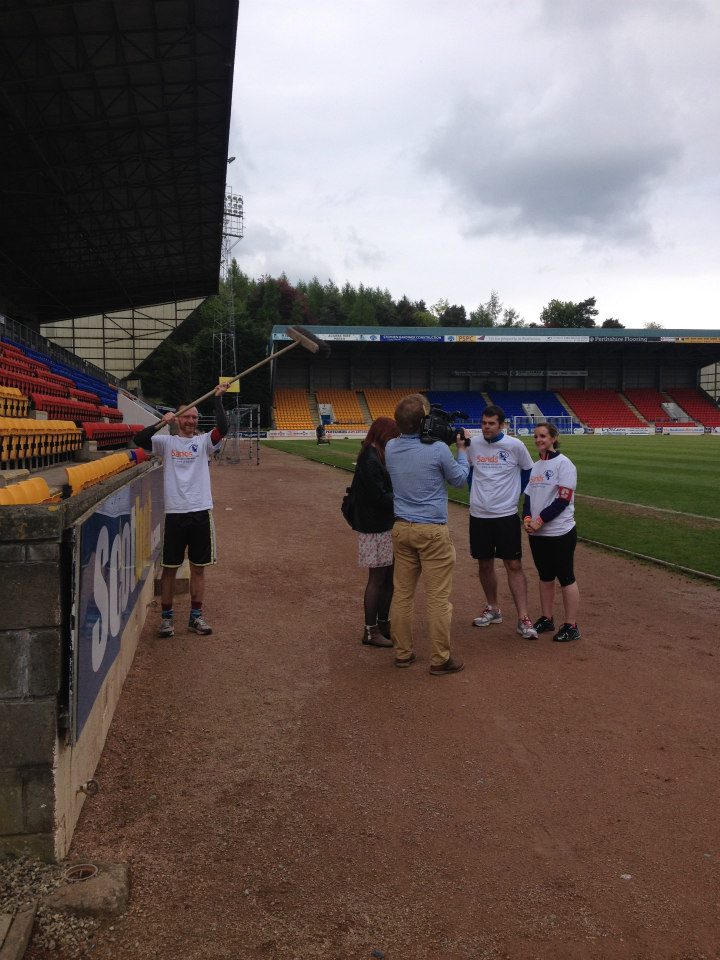 The club itself were fantastically supportive, especially at such a busy time for them. They spent time with us, and gave us a ball signed by the whole squad. This ball, was later sold on ebay, after St Johnstone’s fantastic cup victory, with the takings added to the SANDS pot. The ball went for over £100! 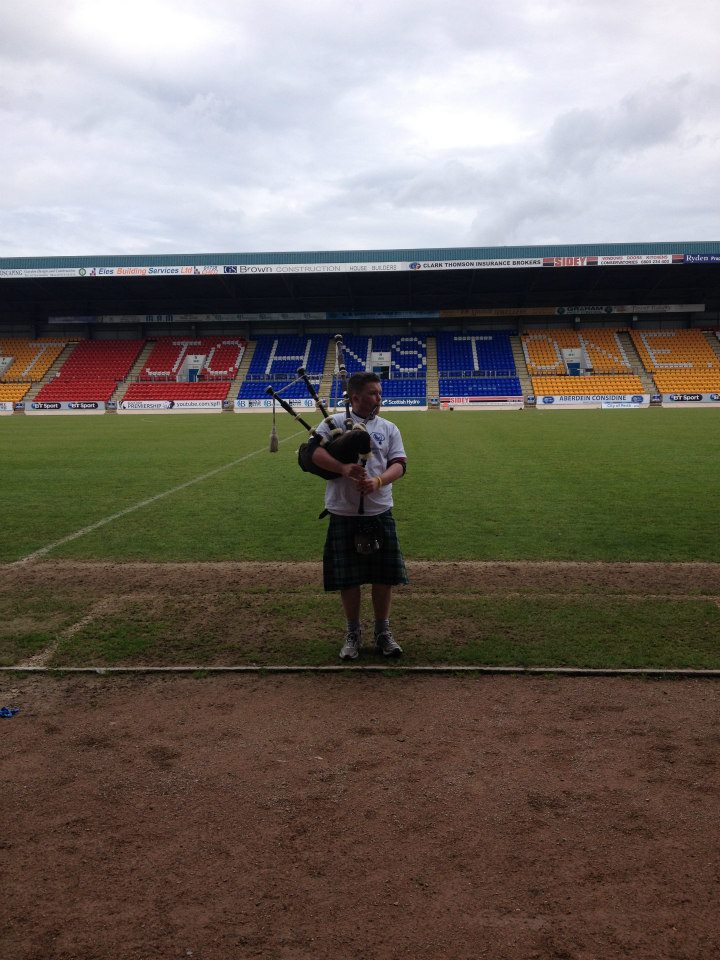 Hats off to St Johnstone for their fantastic hospitality, and they had our 100% support in the final.

It is from Perth, that you see how far apart the Highland clubs are from the hub of the SPFL. We set upon our 2 and a half hour drive to Inverness up the A9. Having travelled this road countless times, I knew what was coming, but it was a new experience to most of the team. It had been such a busy day so far, we just wanted to get to Inverness, Dingwall, Elgin and finally Keith, where we were spending the night! 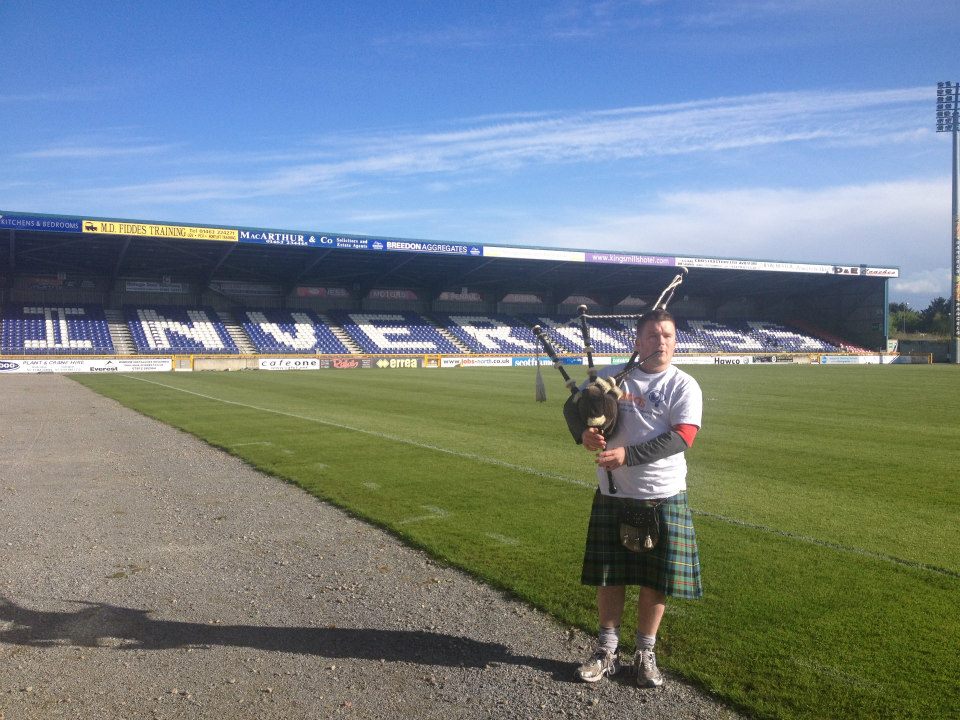 Getting to Inverness was a big one for me. Having played most of my childhood football in and around the Inverness schools, we often went to the Tulloch stadium to cheer on the mighty Caley, and watched them as they galloped through the divisions to where they are now! 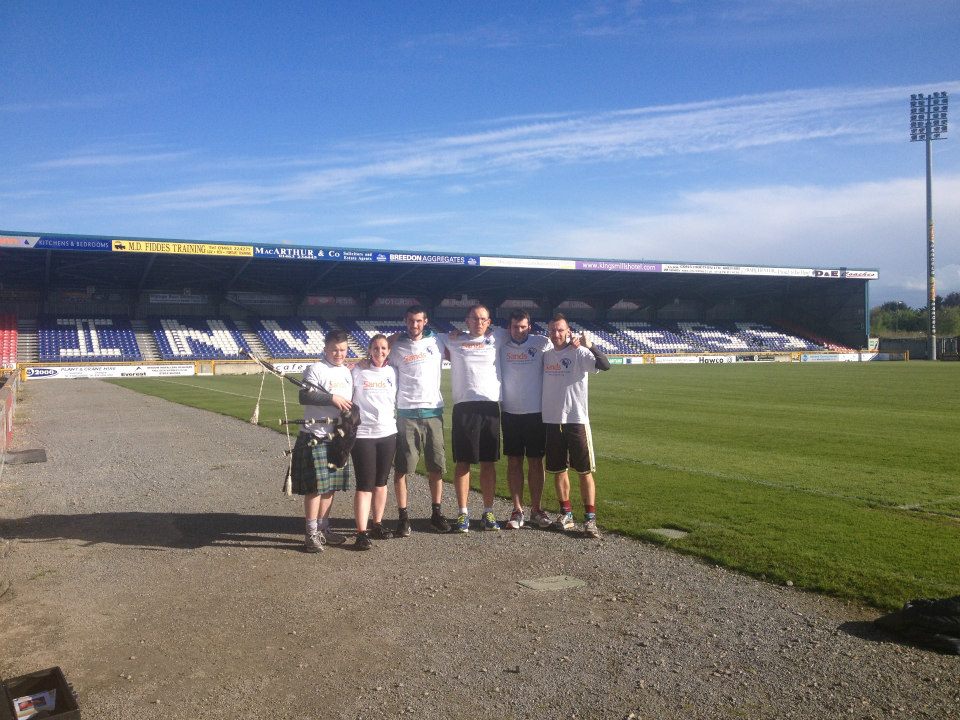 The sun was shining, and it was wonderful to be home in the Highlands! The great sight of the Kessock bridge gave a great setting for the ground, and were now having to cross over to get to Dingwall. 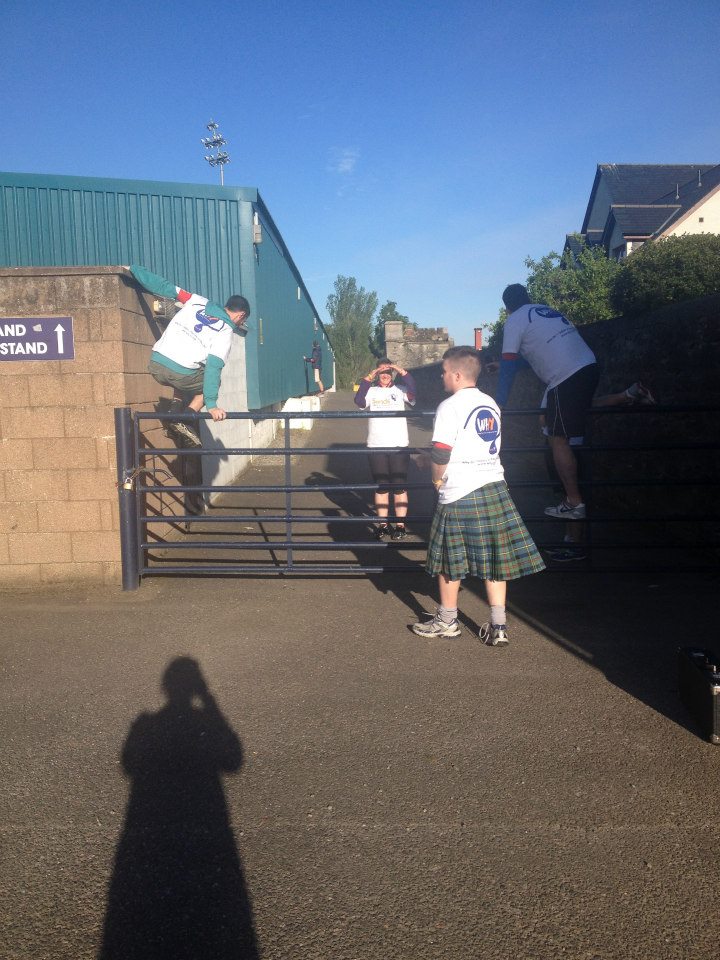 Ross County, the Highland rivals of Inverness, were next, and I had some fun poking fun at the fact they were the first team to not enable us to get into the ground! We had arranged late entry, however the groundsman was nowhere to be seen. 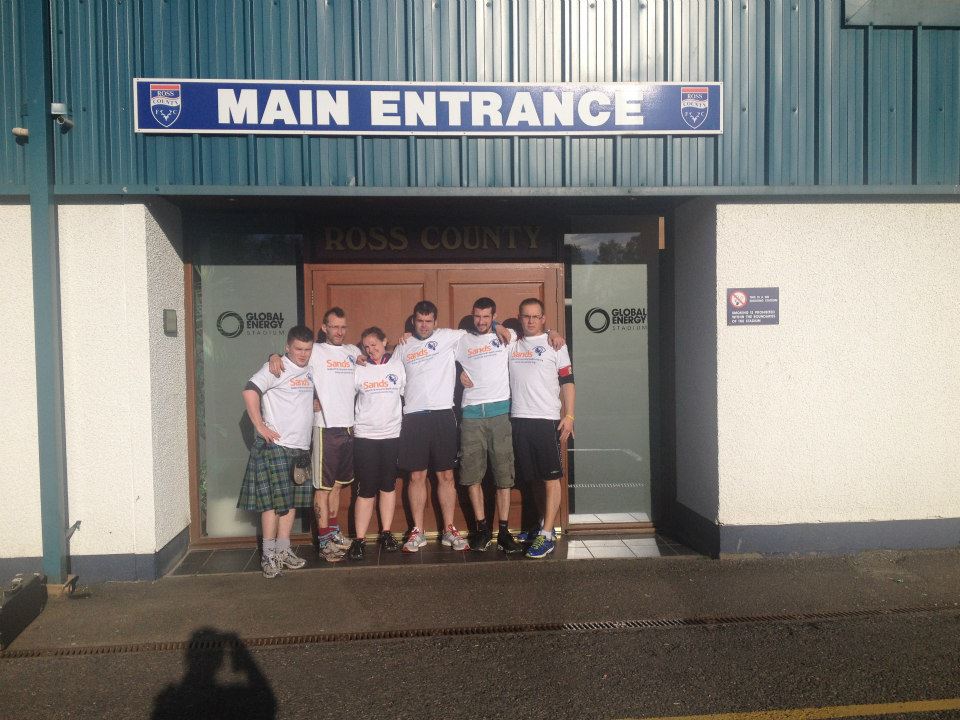 We had to resort to pictures outside, and hopping a fence to run around the outside of the stadium. This in itself brought back memories, as through high school, I took part on competitions and trials around the ground. They really are a fantastic community club, and do so much beyond football…they just didn’t let us in! 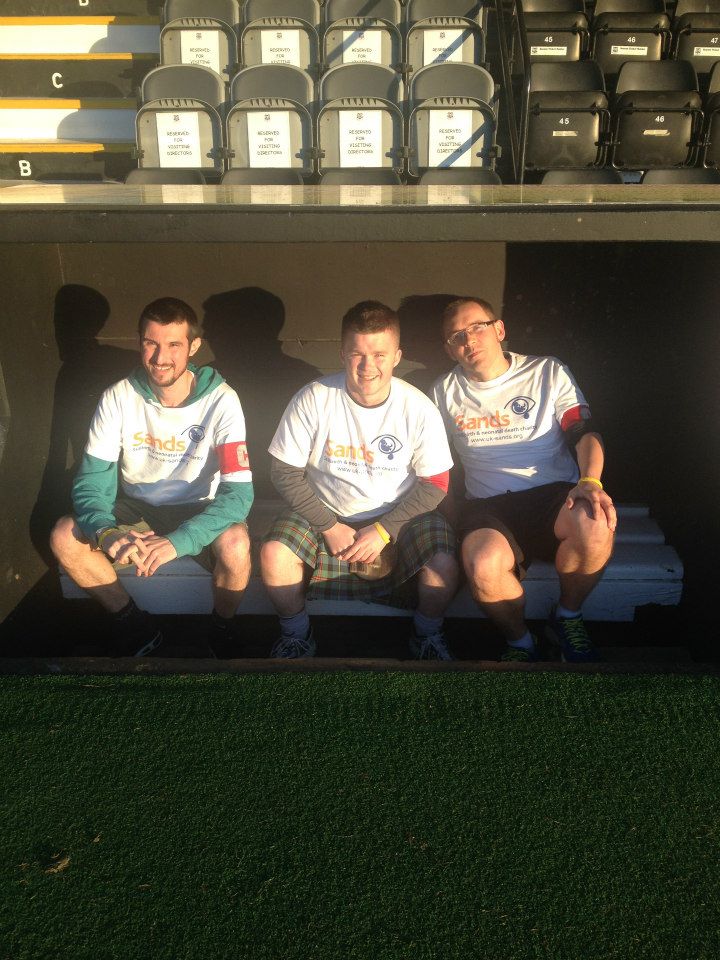 End of day one was now firmly in sight, and as the sun started to go down, we reached Elgin, and Bourghbriggs stadium, location of my greatest ever goal in football might I add! 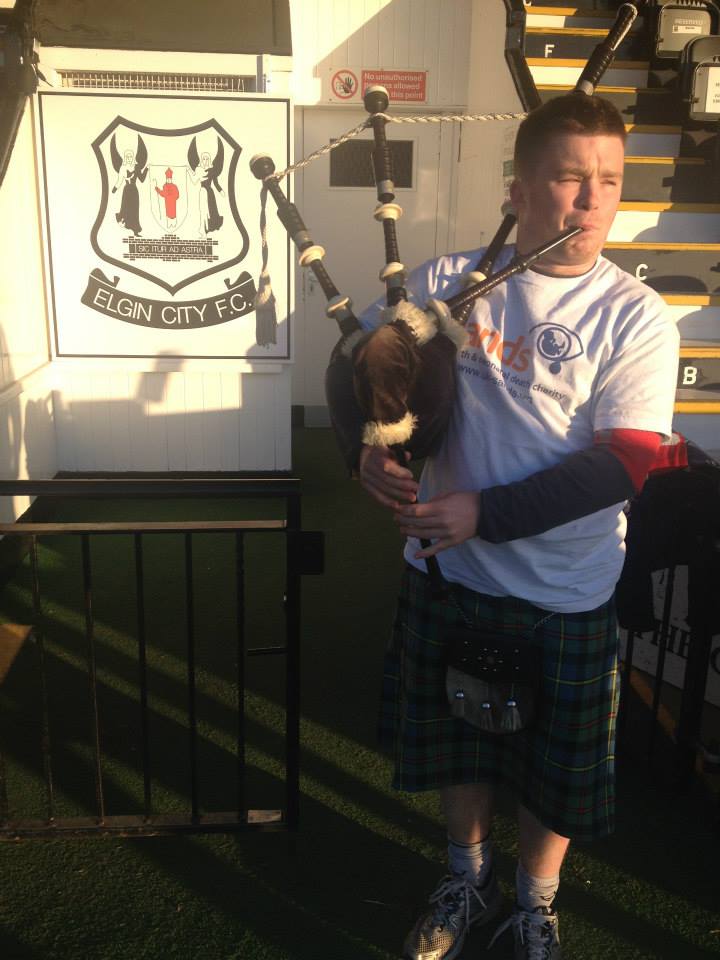 Ian comes from Keith, so we were met by about 20 friends and family, making for a great end to a great day. We really felt we had achieved something already, yet we were only one third of the way through. An official from Elgin City, presented us with a bottle of malt, and gave a very emotional speech.

“Home” to Keith we went. One of the highlights of the trip was seeing a true feat of joinery! A book shelve, that opened up into a bar! Wow!!!

The bar was a bit emptier by the time we went to bed.